The smallest change in mechanical input which produces a change in the output signal.

The ratio of the change in output to the mechanical input.

Electrical simulation of load cell output by insertion of known shunt resistors between appropriate points within the circuitry.

The difference in output readings obtained through electrically simulated and actual applied loads.

The time required to insure that any further change in the parameter being measured is tolerable.

The environmental conditions under which measurements should be made when measurements under any other condition may result in disagreement between various observers at different times and places. These conditions are as follows: Temperature 23 degrees +or-- 2 degrees C (73.4 degrees +or-- 3.6 degrees F.

The range of temperature over which the load cell is compensated to maintain rated output and zero balance within specific limits.

The extremes of temperature within which the load cell will operate within permanent adverse change to any of its performance characteristics.

The resistance of the load cell circuit measured at specific adjacent bridge terminals at standard temperature, with no load applied, and with the excitation and output terminals open--circuited.

The resistance of the load cell circuit measured at the excitation terminals at standard temperature, with no load applied and with the output terminals open--circuited. 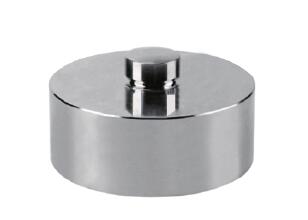